Migrations and Given Names

You have probably  read about how the taste of Gefilte fish, sweet or peppery, can give a hint as to the origin of your family. 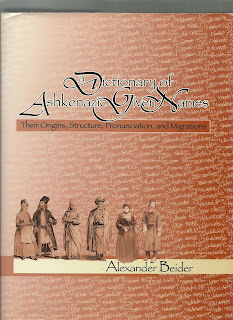 Reading "A Dictionary of Ashkenazic Given Names" by Alexander Beider, he explains that some given names originated in Germany and others in Bohemia Moravia and that these were brought to Poland by Jewish migrants.

Would that mean that a given name given 100 or 150 years ago in a specific family, could hint to where that family had come from?

According to Alexander Beider, Christians in Germany used the name Golda back in the 11th century,and then the Jews started using it. German Jews brought the name with them when they  migrated to the Slavic countries.

According to Alexander Beider, Feiga was created by Jews in Germany from the Judeo-German word for bird. Compare to the present day German word Vogel.
Jewish migrants  from Germany brought the name to the Slavic countries.
The name also has a connection to the Hebrew name Zippora.

Sheindel is a variant of Sheyne, a name that came from Germany and the German adjective "schoene", meaning beautiful. It was brought from Germany to the Slavic countries by Jewish migrants. (Beider)

Could it be  that the name  Cluwa comes from what Beider writes down as Tislave? He explains that Tislave's origin is Zdislava/Zdeslava and that it came into Jewish use in Bohemia Moravia, and that Jewish migrants brought the name with them to Bavaria and to Poland. He writes it was a rare name in the Ashkenazic communities.